Namibia is one such example – the country’s natural mineral riches and small population of about 2.5 million (2016) have made it an upper middle-income country.1 At the same time, the country is one of the most unequal countries in the world, with a Gini coefficient of 0.56

While Namibia is classified as an upper middle-income country and, according to its Vision 2030, aspires to become a skills-based economy, the current education system is not producing the quality graduates it requires. In 2017, only 39 per cent of students qualified for tertiary education. Other challenges include:

• High levels of unemployment – at 34 per cent, general unemployment is high, with almost half of the country’s younger population (15- to 34-year-olds) reported to be unemployed (43 per cent);
• Inequalities for most marginalised – these persist especially along ethnic, disability, regional and residential area lines, with only 4 per cent of learners with disabilities completing tertiary education;
• Costs of Education – despite considerable investments in education (24 per cent of the national budget), associated costs such as transport to school and school uniforms still appear to inhibit access to education for Namibian children from poor families, particularly in sparsely populated areas;
• High drop-out and repetition – poor learning outcomes due to high dropout and repetition rates affect more boys than girls, from the early years onwards. In the most remote areas, less than 1 per cent of children entering Grade 1 complete secondary education;
• Quality of education – education quality is poor due to unqualified and underqualified teachers and poor school infrastructure (including water and sanitation facilities).

The Peter Krämer Foundation, partnering with the Government of Namibia and partners from the public and private sector, is strategically responding to the challenges and opportunities in Namibia. The Peter Krämer Foundation along with UNICEF Namibia has a long track record of implementing education programmes that result in real and sustainable change for children. In a country where only 16 per cent of children aged 0 to 4 years attend early childhood development programmes, many are left behind, resulting in low access to pre-primary education (5 per cent). To combat this, the Peter Krämer Foundation along with UNICEF have been working with the government to improve access to early childhood development including developing the National Early Childhood Development Framework and policy guidelines. Instances of poor health and low nutrition are common in Namibian schools. UNICEF continues to focus on partnerships and relationship building, and has worked to revitalize the National School Health Task Force. More recently, we, in partnership with the Ministries of Education and Health, have trained over 300 regional school health officials across the country, and is developing a School Health Training Manual and the National Safe School Framework. These bring about an environment more conducive to learning through an integrated approach which centres on school health and safety. We have also been providing support to the government to strengthen the education system, while focusing on data generation and building the capacity of government officials, as well as teachers and principals, to improve financial efficiencies in the sector. This has resulted in improved data collection and therefore increased the data turnaround for the Annual Education Census by 500 per cent.

In 2018, UNICEF and the Peter Krämer Foundation launched its first Business Council, which aims to expand strategic engagement with the public and private sectors. The Business Council will work with the private sector to address and develop skills needed for young people by providing affordable Internet to all secondary schools. 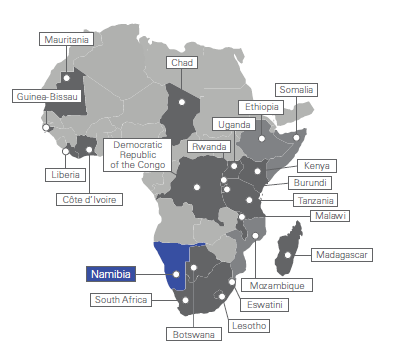